Nick P. of Arlington, Massachusetts had some concerns with the stability of his house.  The foundation wall was cracking and the collapse of the wall was imminent. He decided to call Erickson Foundation Solutions to receive a free inspection and determine the causes and solution. Design Specialist David Cormier went to Nick's home and found a few places that were showing signs of settlement and potential collapse. The interior wall toward the front of the home had a significant crack in it and the wall facing the backyard had a significant outward bowing. With this foundation being primarily stone-based rather than concrete, making repairs on cracked and bowing walls was going to be a little more difficult. The front and back wall are both 42' long.

David proposed that EFS install Geolock wall anchors to the front and back of the home and PowerBrace wall supports on the back wall of the home. Lastly, David also designed a system with Push Piers for the back of the home to stabilize the settlement, and SmartJacks in the basement to assist with stabilizing the beams and floor joists above. We enlisted the help and collaboration of Team Engineering to assist us in safety and reinforcing the outward leaning wall.

The first thing that was solved during this project was getting heavy equipment to the backyard. The crane would have worked, but the production team decided to create a ramp with dirt and stone material. Once the ramp was complete, the machinery was easily able to drive down and access the back of the home.

The first stage of the project entailed the installation of the GeoLocks on the foundation wall at the front of the house. There were 7 Geolocks installed along this wall, spaced out in a way that allowed for maximum support against the bowing wall. The anchors for the Geolocks were set in the front yard, extending out about 10 feet away from the foundation wall.

The second stage involved the installation of the PowerBraces and Push Piers. To secure this wall the production team mounted PowerBraces about 4 feet apart just above the Push Piers to create a solid point where they could lift from when the piers were pushed using the hydraulic press. The PowerBraces were in place to help keep the stone foundation wall from crumbling or cracking during the lifting process. To further help with preserving the integrity of the stone foundation wall, prior to adding stress to the wall with the Push Piers, the entire system was tied together and reinforced with rebar steel.

The third stage was to install more Geolocks on the foundation wall at the back of the home. After the Power Braces and Push Piers were installed the Geolocks were threaded through a hole in the Power Braces and drilled through the wall and under the basement slab. As one of the main concerns with this foundation was that it was bowing out and essentially falling down the slope, the Geolocks were there to prevent that wall from bowing out any further. The Geolock rods in this section were 10 feet long and were secured on the interior about 2 feet beneath the slab.

The last items to be installed were the Smart Jack supports. 3 Smart Jacks were installed under the main support beam to help support the floor joists of the home, as some of the joists were sagging and affecting the floor system up above. These supports needed additional footings and could not be directly installed on the existing concrete slab of the basement. The production team excavated an 18" by 18" hole, created a footing composed of engineered fill and concrete, and then fastened the posts over these. 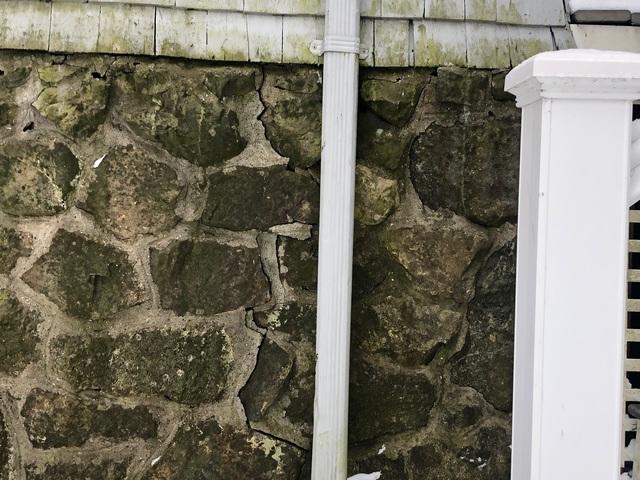 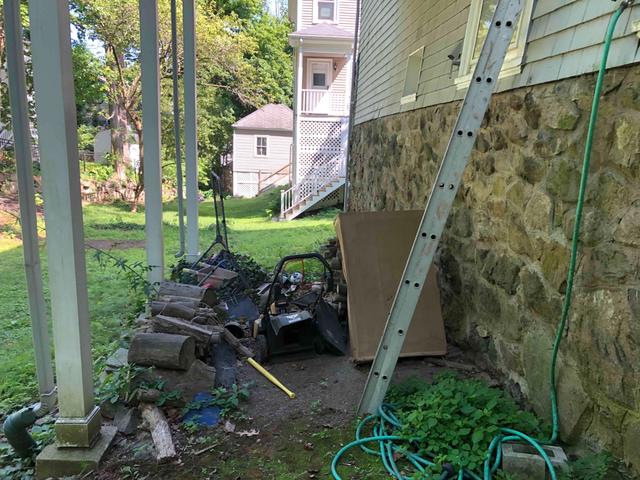 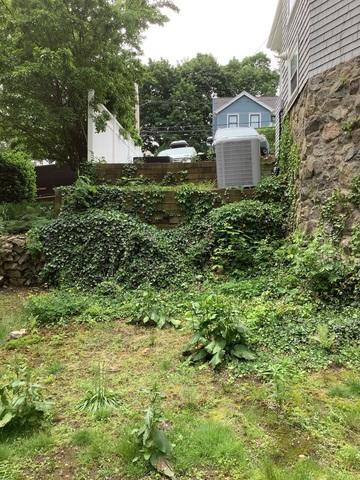 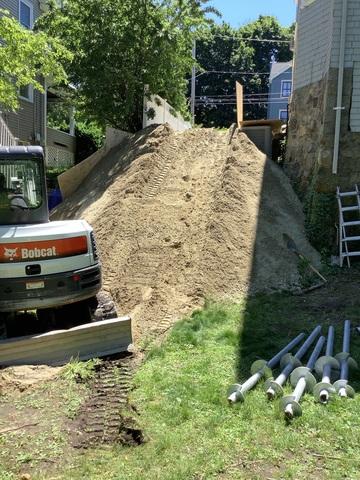 Dirt Brought in to Allow Access for Heavy Equipment 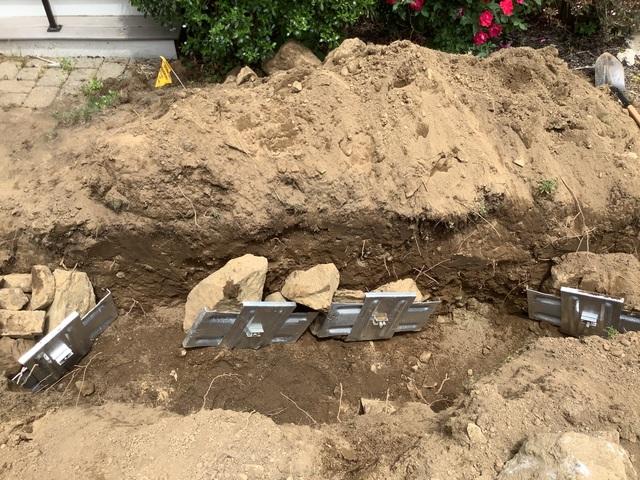 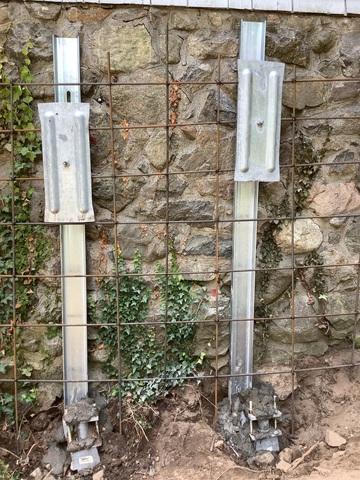 Power Brace, Geolock, and Push Pier on Back Wall 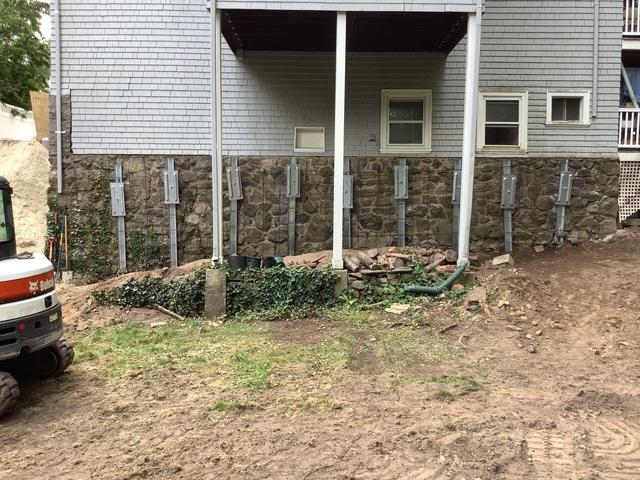 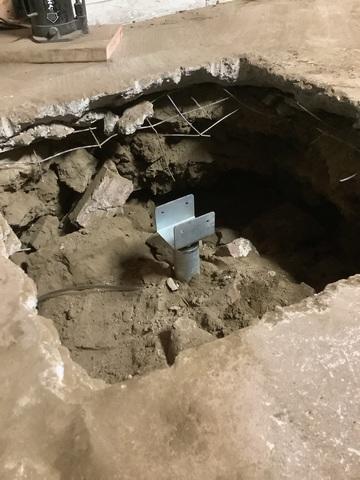 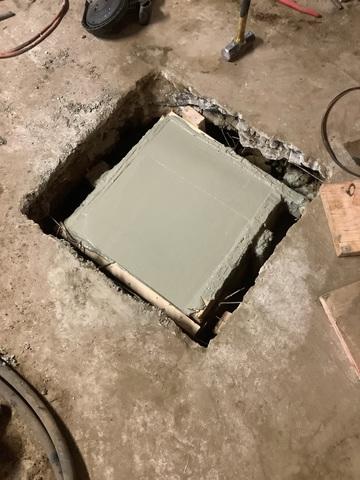 Base Set for Smart Jack 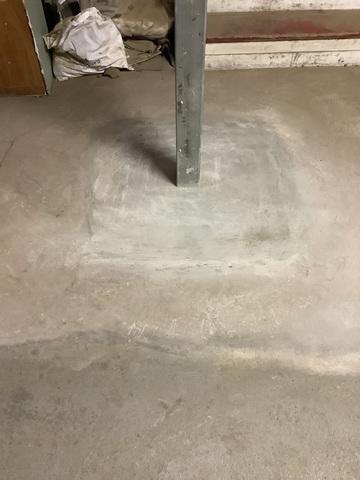