The homeowner of this property in Lincoln, MA had recently purchased the house. During the inspection process of the sale, a local inspector tested the radon levels in the air, the results of which showed levels were just above 9.0 pCi/l. According to EPA standards, a safe level is below 4.0, and so the new homeowner wanted to action to lower the levels and improve the quality of air in the house.

The home itself was built in the 1960's, and seemed to be on a very high water table. The overall perimeter of the home was roughly 50 feet long and 31 feet in depth. As radon systems generally originate in the lower levels or basement of a home, it's important to highlight the basement was half finished. Also noteworthy, the basement had two existing sump pump systems. The covers over the sump pumps were loosely fastened and not air tight. This meant air from beneath the basement slab was able to vent out directly into the living space of the home, exposing the family to the radon particles.

As half of the basement space was finished, the homeowners wanted the radon mitigation system to be installed in the unfinished section so that it would not disturb the finished area or require any extensive demolition or remodel. This unfinished section was easily accessible through a bulkhead entrance at the back of the house. There was more than 50 feet of pipe used for the mitigation system in the basement.

Design specialist Chris Greenwood took all the necessary measurements to determine the best type of radon mitigation system needed, as well as the best location. He accounted for the existing sump pumps, as well as the fact half the basement area was finished. One important aspect of a radon mitigation system is to seal any and all cracks within the concrete slab or foundation walls. As not all of the floor or walls were exposed, Chris proposed installation of a double extraction system. With two extraction points, it would be much more likely to lower the levels of radon by accounting for any cracks that were not visible. A proper radon mitigation system works like a vacuum, and so the system components and the basement area should be as air tight as possible.

Crew foreman Branden Edwards and installation specialist Kyle DeChane were able to complete installation of the entire system in a single day. One of the first steps for the production team to complete was sealing the existing sump pumps. One of the pumps was sealed tight and not actively tied into the new radon system. The other existing lid was replaced with a premium sump cover kit, with a new 4 inch PVC pipe leading directly from the basin and up into the 4 inch pipe of the new radon mitigation system.

The next step involved installation of the PVC pipe within the basement area. The pipe would connect both extraction points and was designed to lead out the back of the home. There was more than 50 feet of pipe used for the mitigation system in the basement.

The final stages were installing and securing the PVC pipe and vent to the house on the exterior. More than 25 feet of additional PVC was required for this aspect of the project in order for the vent of the system to end 2 feet above the roofline of the house, and safely away from any windows. The top section of the vent pipe is a muffler system, which acts as a noise and vibration buffer against the fan in the system. Every radon mitigation fan produces some level of noise and vibration, and the muffler option helps dampen this side affect. The fan also came with a fan moisture guard, which helps prevent humidity levels from rising within the mitigation system, therefore preventing mold or mildew from building up within the pipes. 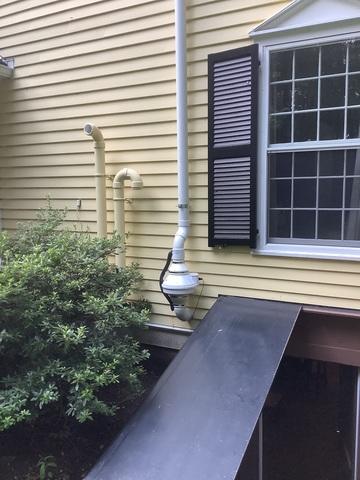 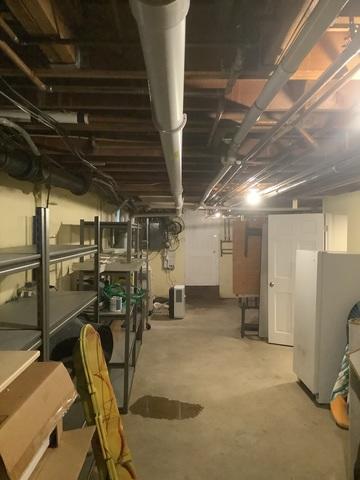 50+ feet of pipe needed in this large basement space. 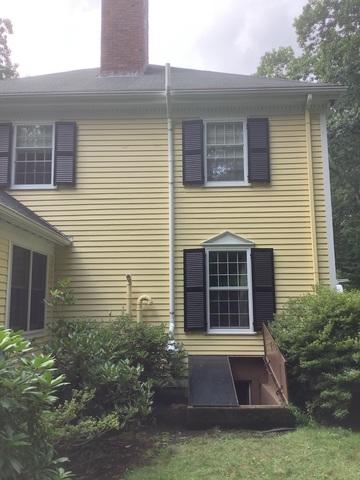 Radon mitigation system vent pipe extending up beyond the roofline of the home. 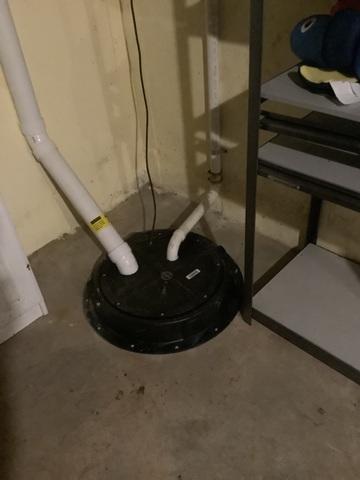