Homeowner Alice G. of Nashua, NH had some serious concerns with her home. The house was built in 1971 and she had been living there ever since. Her goal in the future is to keep the home in the family and leave it to her children. However, there were several noticeable cracks throughout the poured concrete foundation walls and clear signs of settlement issues. When foundations and their homes are settling, these problems only get worse in time, and so Alice really wanted to find a permanent solution to the problem.

The settlement issues originally began in the early 2000's. Though the home was built in the 1970's, over the years the soil conditions were affected by seasons of drought and saturation, which lead to the soil eroding gradually. Voids formed beneath the foundation walls, and of course without proper support the structure began to settle and the walls began to shift and crack. When Alice first noticed this happening in 2005, she did the right thing and hired a contractor to stabilize the foundation with helical piers. Unfortunately, the contractor was not experienced and did not install the helical pier system properly. The piers used were too thin and they were not installed deep enough beneath the homes foundation to provide the needed support. The soils these piers entered were loose and unstable and still susceptible to settlement. While these piers seemed to do the trick for 10-12 years for Alice, ultimately the settlement issue returned and she began to notice cracks forming and the foundation shifting again.

Design specialist Chris Greenwood performed a thorough inspection on both the interior and exterior of the home. Upon reviewing what the previous contractor failed to achieve with their helical pier system, Chris was confident he could design an efficient, permanent solution for Alice.

Chris designed a more robust system with 8 helical piers to be installed abutting the older piers. These helical piers would be installed beneath the footing of the foundation one at a time. Once each one was installed, the production team would connect each pier with a hydraulic system, allowing them to lift the entire backside of the structure uniformly. While lifting the home, the production team would monitor the existing wall cracks for movement, as well as other sections of the wall to ensure too much pressure was not applied or causing any damage.

The helical piers for Erickson Foundation Solutions were installed by Nick Carelli, Nate Erickson, Dave Elliot, Jacob Mackinnon, and Josh Barnard. The team kept an accurate log on each depth the piers reached, as well as at what pressure they were installed. By monitoring these figures, the team could guarantee the new helical piers were installed deep enough into the correct soil type in order to permanently stabilize the weight of the structure above them. The depths of the piers ranged from 9 ft. to 18 ft.

Additionally, the production team noticed while lifting with the piers that the foundation wall began to buckle and push outwards. The team planned for such a result and prepared to stabilize the wall with GeoLock wall anchors. The GeoLocks would be installed from the exterior, backside of the home, with large steel rods drilled through the foundation wall and into the soils beneath the garage floor slab. The slab of the garage was then excavated so the team could install their anchors connecting to the rods. These anchors permanently stabilize the bowing wall from any movement and will allow the helical piers to do their job without causing the foundation wall to bow or lean.

In the end, Alice was incredibly impressed with the knowledge and efficiency of our Erickson team. The work and piers installed are fully warrantied and will permanently stabilize her home's foundation for decades to come. 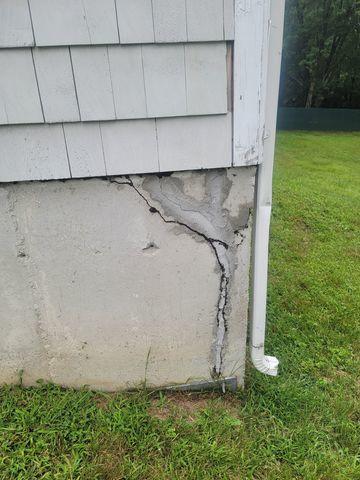 Severe cracking at one of the foundation corners. 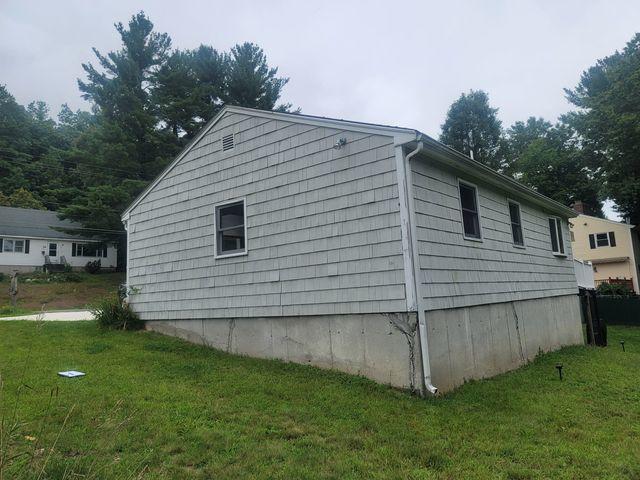 View of the homes foundation in Nashua, NH. There are 5 major cracks all caused by settling soils. 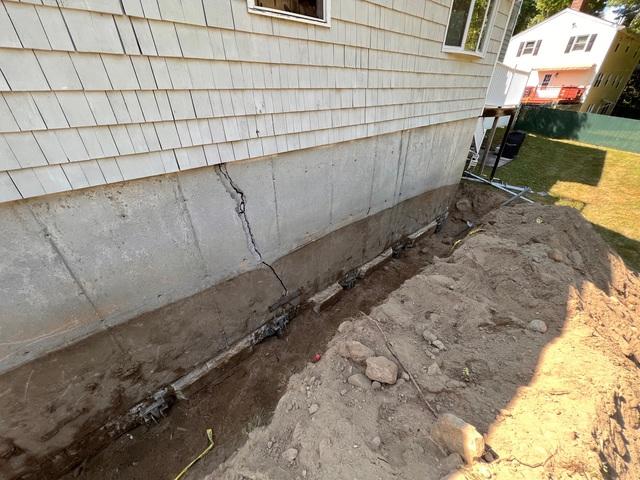 View of the old, failing helical piers after our team excavated to expose the foundation footing. 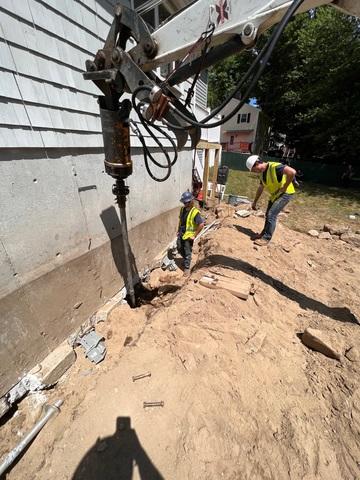 Our Erickson Foundation Solutions production team installing helical piers. Hard hats and highly visible safety vests are a must. Safety is a must with our team. 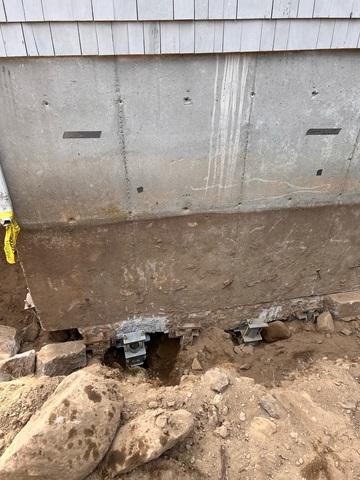 Our bigger, more robust helical piers installed next to the failing piers. 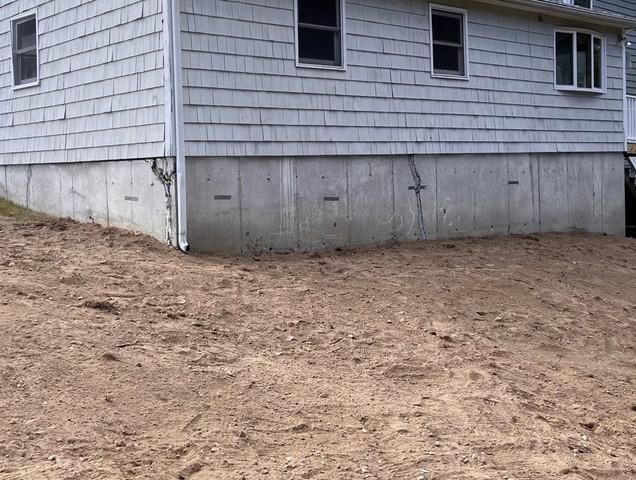 After installation of the helical piers, the trench is backfilled and the property is graded back to original layout. The GeoLocks will now be installed, and the cracks of the foundation will also be sealed. There is no living space on the other side of the foundation wall, so water seepage is not a huge concern.

"I met the workers, Nick Carelli, Dave Elliot, Jake and Josh Tyler and am so pleased with their experience and professionalism. They worked tirelessly and hard..."
Read More
- Alice G., Nashua, NH
Back to Previous Page
Back to Case Studies