SAVE up to 10% on your foundation repair project through February, 2020. Ask your system design specialist about all savings during your free inspection and estimate.

The homeowner tested his home for radon in 2015 and had levels of 4 pCi/L in the basement. As a standard, the Environmental Protection Agency (EPA) has defined 4.0 pCi/L as the "action level" for any indoor environment. He decided not to install any system at this point.

A year later, the homeowner tested again and found the radon levels to be 9.8 in the basement and 4.7 upstairs in the house. As the radon gas levels were rising and becoming a risk to the family, they decided to install a radon mitigation system.

Erickson Foundation Supportworks provided the homeowner with a free estimate for a radon mitigation system. No further testing was needed at this point, as the homeowner had already tested twice himself.

A radon mitigation system was installed, starting in the basement. After determining the subfloor air communication beneath the basement slab, a pipe was installed in the floor. A manometer is attached to the pipe, allowing the homeowner to check the quality of the mitigation system, ensuring the air is being properly pulled up and out of the soil before it even reaches the house.

From the basement, the pipe poked out through a wall at the rear of the house, and then extended up above the roof line of the house. A fan is installed on the outside of the home as well, built into the pipe, which pulls the radon gas upwards.

With the system completely installed, the homeowner is left with another test kit. The radon gas levels should be tested in the basement again, 24 hours after installation. In this case, the levels were below 4.0, and considered safe. 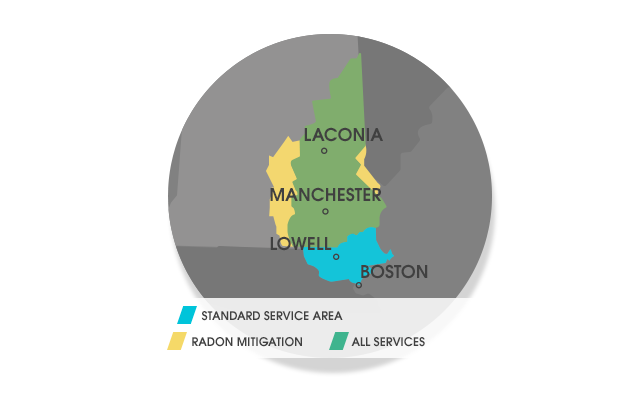